Entrepreneurship Can Help the Rust Belt Stem Their Population Loss

Cleveland leads all big cities in population loss for 2007 according to the U.S. Census Bureau. Cleveland and other Rust Belt cities have been losing population for over 50 years.These once proud cities in the Midwest and the East are losing people who are seeking better economic opportunities and milder weather.

Cities in the South and West are attracting a lot of those migrating to a better life.

Dallas, Atlanta, Houston, and Las Vegas are newer, have more space for growth and offer better economic opportunity to their residents.

Will the so called Rust Belt every recover? Can it experience the growth that it experienced back in the early 20th century? There is no way that the rust belt will be able to compete with the weather in the South and the West but the economy can be improved to make the area better for the people that are staying and also make the area more desirable to others who want to relocate there.

Entrepreneurs create jobs that drive the growth in this capitalistic country.

Why aren’t entrepreneurs driving the growth in the so called Rust Belt? These areas once led the United States in economic growth and contributed to the vast wealth of this country.

Men like John Rockefeller, Henry Ford, and Harvey Firestone all called the Rust Belt home for family and business. Areas like Cleveland and Detroit can and are offering incentives to businesses that want to relocate to their cities but companies are not lining up to move to Cleveland or Detroit .

The best these cities can do is to concentrate on the entrepreneurs already living in their areas. The entrepreneurs that are already residents are the ones who know the value of the city they live in. The best and brightest also need to be encouraged to consider entrepreneurship and they should receive as much support as possible.

Cities can then try to attract businesses and entrepreneurs from other parts of the country.

Programs and incentives should be made available to budding entrepreneurs already living in the Rust Belt to help produce more jobs and reduce the so called brain drain to other regions of the country.

Microloan programs that offer loans to small business startups should be expanded to offer more loans to people that want to try entrepreneurship instead of letting them leave for greener pastures in the South and the West.

These loan programs are few and far between now. Expanding these programs and creating opportunities for everyone, especially our college graduates are what’s needed. This may not solve all the Rust Belts problems but grooming and supporting more local entrepreneurs would be a big step in the right direction. 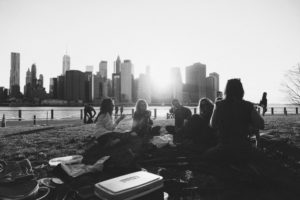